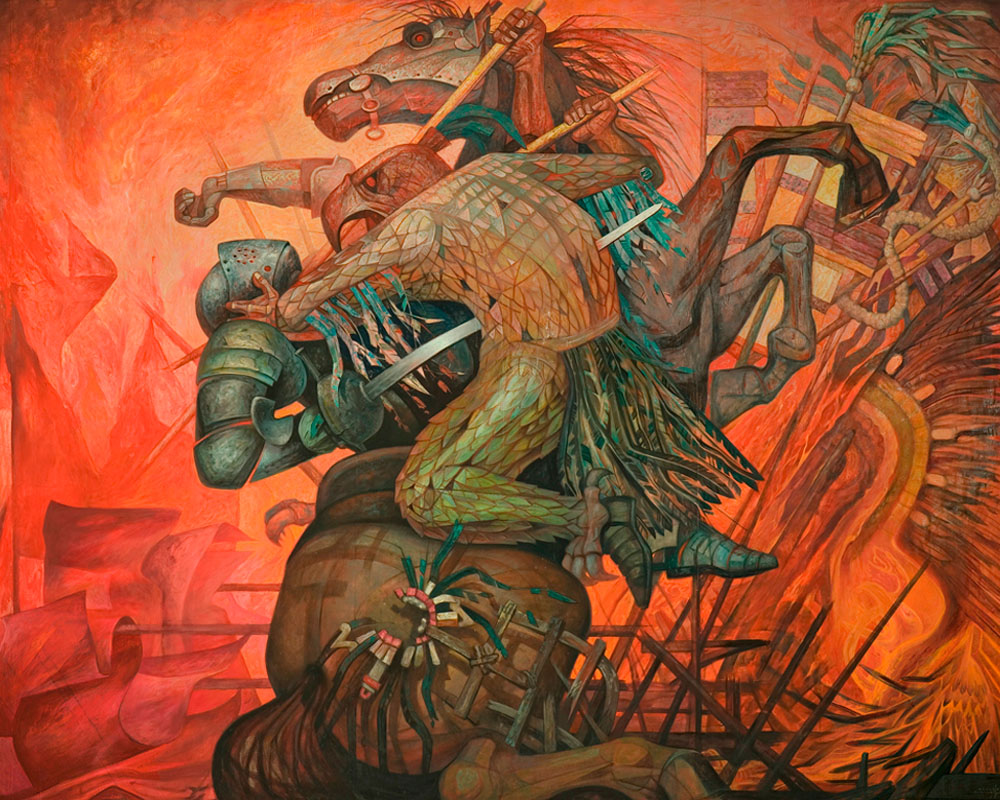 Material and technique: acrylic on wood covered with fabric.

It represents the birth of Mexican culture as a product of the clash of two different cultures: Nahuatl, flourishing in Mesoamerica, and Spanish. This is clearly symbolized in the figures of the eagle warrior and the Spanish conqueror, who die at the same time in the fight. The Mexican homeland will be built by the result of these two worldviews.

In the lower right corner there is a small eagle that emerges amidst the din of battle. It represents the birth of Mexico gestated in the crucible of the War of Conquest. At the bottom of the mural, both on the right and on the left, the insignia of the two sides can be seen: the indigenous plumes and banners and the Spanish flags, consuming themselves in the fire of battle. 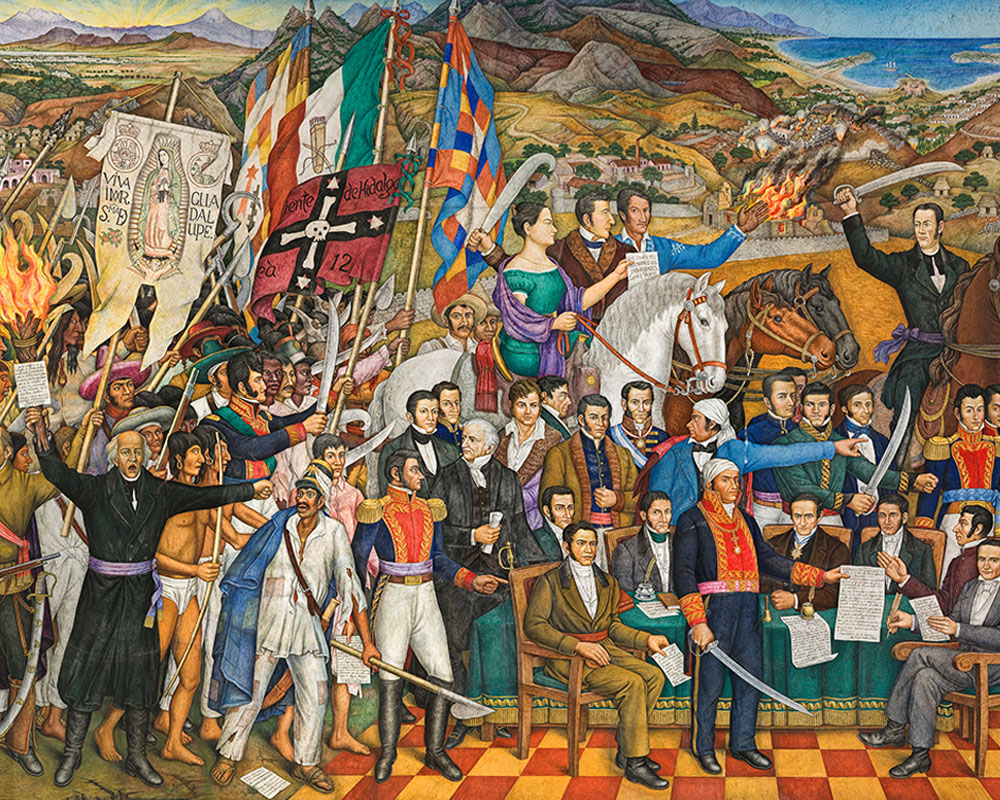 Material and technique: fresh on rigging

This altarpiece is the allegory of a story that began in 1795 and culminates in 1813. The work takes place in four acts: it starts on the left showing the unjust social organization in New Spain. The second act includes some ideological and political precursors located under a neoclassical building that symbolizes the Encyclopedism. The third part refers to the movement itself. The main figure is the priest Hidalgo, who appears twice: one as he is commonly known and the other younger and in costume. The last part of the mural shows the Chilpancingo Congress with José María Morelos at the front, also portrayed twice. Finally, the moon on the left side and the day that is born on the right give the idea that the mural covers a symbolic day in which Mexico passed from the darkness of Spanish domination in the light of its autonomy. 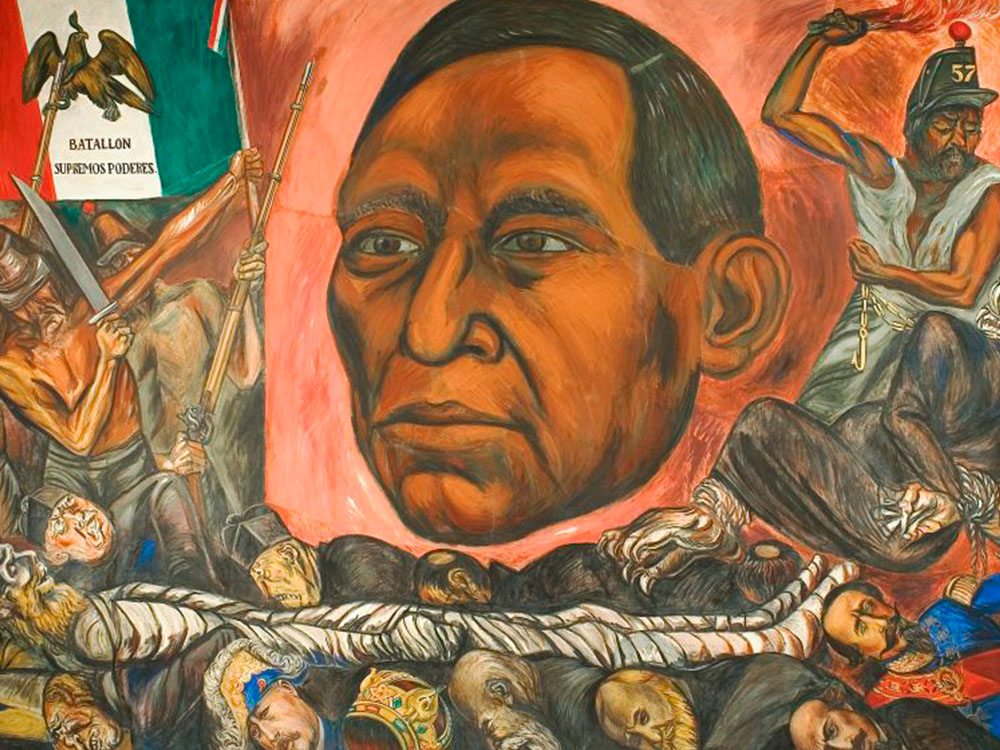 Location. Room 8This mural represents the triumph of the liberals led by President Benito Juarez on the empire of Maximilian of Hapsburg (1864 - 1867). In the center there is a monumental portrait of Benito Juárez that evokes the great Olmec sculptures. In the lower part appears a series of characters, collaborators of the conservative group and allies of the empire. Maximiliano is a shrouded corpse that rests on the head of all those who offered him the throne of Mexico. Above the mummy appears the reactionary clergy who conspire against the people who wield their weapons. To the right of Juarez's head is a soldier wearing the number 57 on his cap as a symbol of the Constitution promulgated that year. The guerrilla with the torn shirt raises a revolutionary torch in his right hand, while with the left he holds the chains tied around the neck of an ecclesiastic, a clawed monster defeated by the Reform Laws. 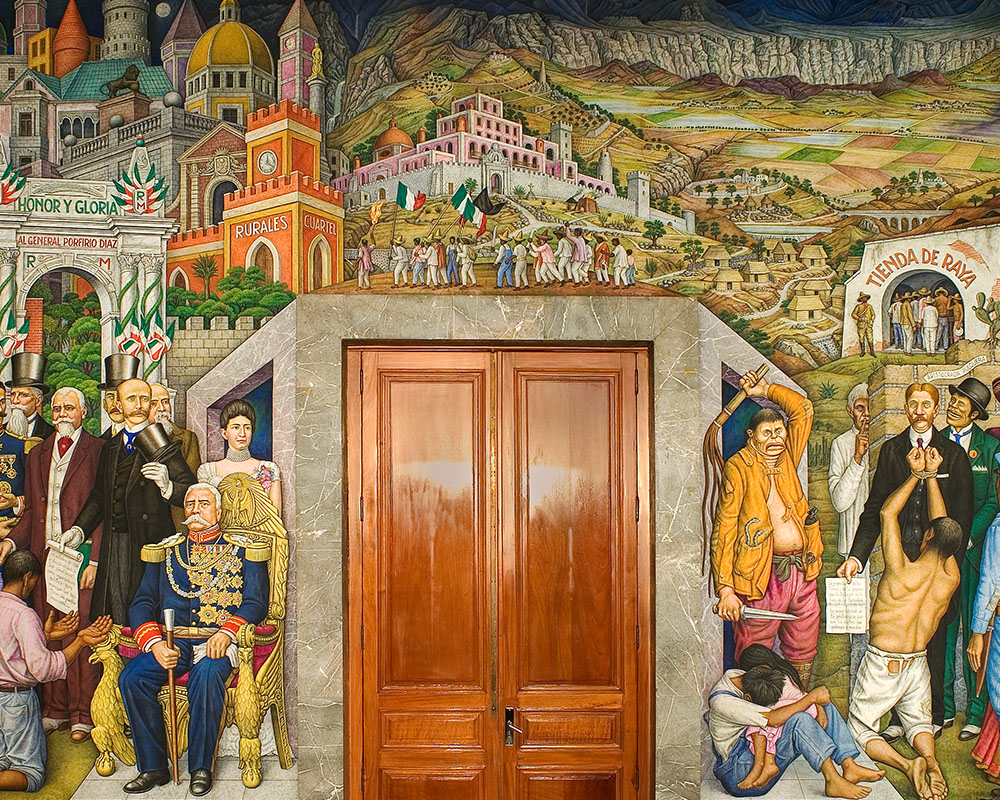 This mural represents the Porfirian era. On the left side is General Diaz surrounded by some members of his cabinet and politicians of the time. Under them can be seen the presence of a peasant with his wife and son paying homage to the dictator. In the upper part, on this same side, there is a group of constructions with a Frenchified character and a rural barracks, the political police of the time. A group of peasants go to the place armed with machetes, representing the first signs of the Revolution. On the right side stands a strip shop. Below, in contrast to Díaz, a campesino tortured by caciques and foremen is exposed. In this same section you can see a soldier who watches over torture, a woman who cries to whom her husband may be and a man with a girl in an attitude of defeat. The old man behind the wall advises to remain silent, demonstrating the fear that the population had. 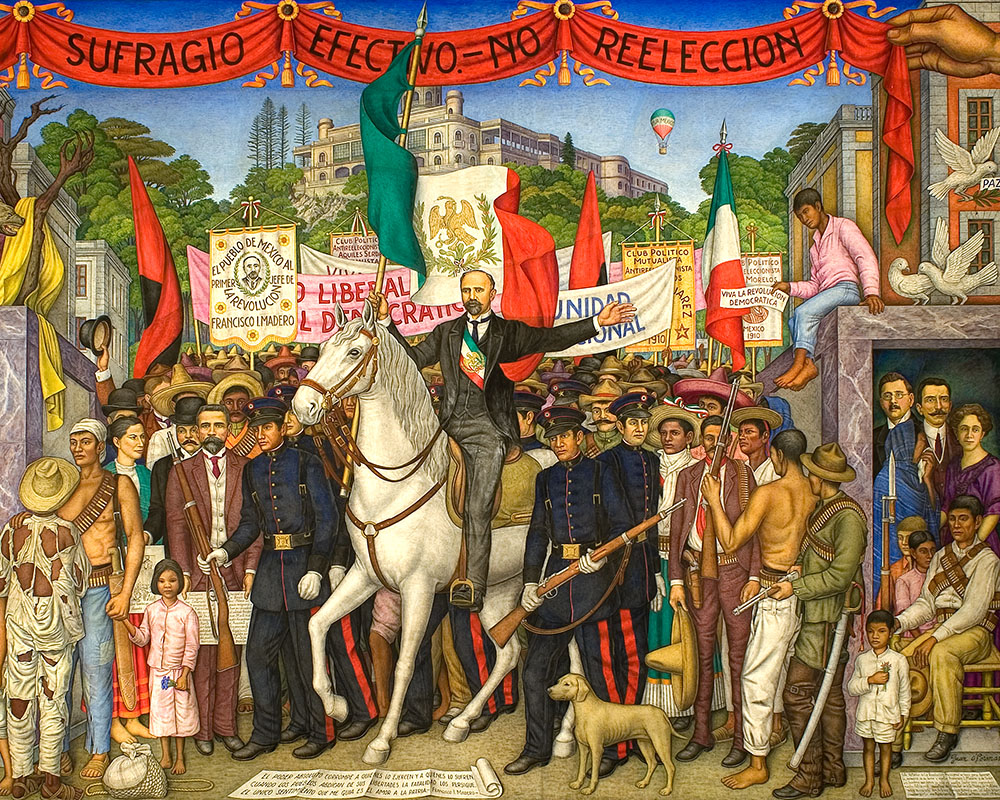 This mural shows the end of the first stage of the Mexican Revolution with the so-called "March of Loyalty". At the center of this space, Francisco I. Madero, riding on horseback, is accompanied by cadets of the Military College and by politicians of the revolutionary era, from the Chapultepec Castle to the city center to face the armed uprising in the Citadel. . In the upper part the painting ends a red band with the legend "Suffrage effective, no re-election". On the left side, the US ambassador, Henry Lane Wilson, hands the presidential band to Victoriano Huerta; Above them are two hyenas, a symbol of betrayal. At the other extreme are the figures of Vice President Pino Suárez along with Sara Pérez de Madero and Gustavo Adolfo Madero. Above them fly doves. In the background, the Castillo de Chapultepec is the vanishing point on the horizon. 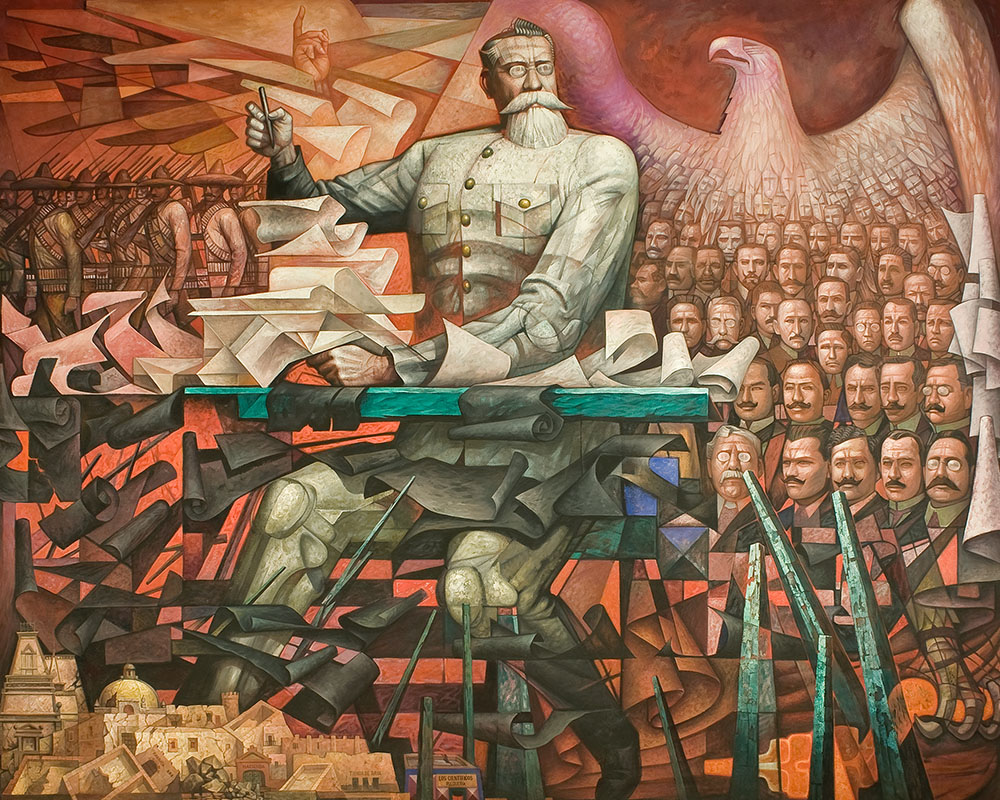 Material and technique: acrylic on wood covered with fabric

The central figure of this mural is Venustiano Carranza, First Chief of the Constitutionalist Army, writing the Constitution that until now governs the country. In the upper left corner appear several revolutionary figures with their weapons on their shoulders, symbolizing the violent struggle that overthrew the Porfirian regime. In the lower part of that same side can be seen the destruction of the old exploitation structures: the raya shops and the haciendas.

On the right side is represented the Constituent Congress, these characters are blurred to become an eagle, symbol of the country, which conveys to Venustiano Carranza his voice, the voice of the country. Carranza is presented in an attitude of listening, with his hand raised ready to transcribe on paper the designs of the eagle. On his table there are white papers where the precepts of the new Constitution and black papers that fall from the table symbolizing the injustice of the Porfirian precepts remain. 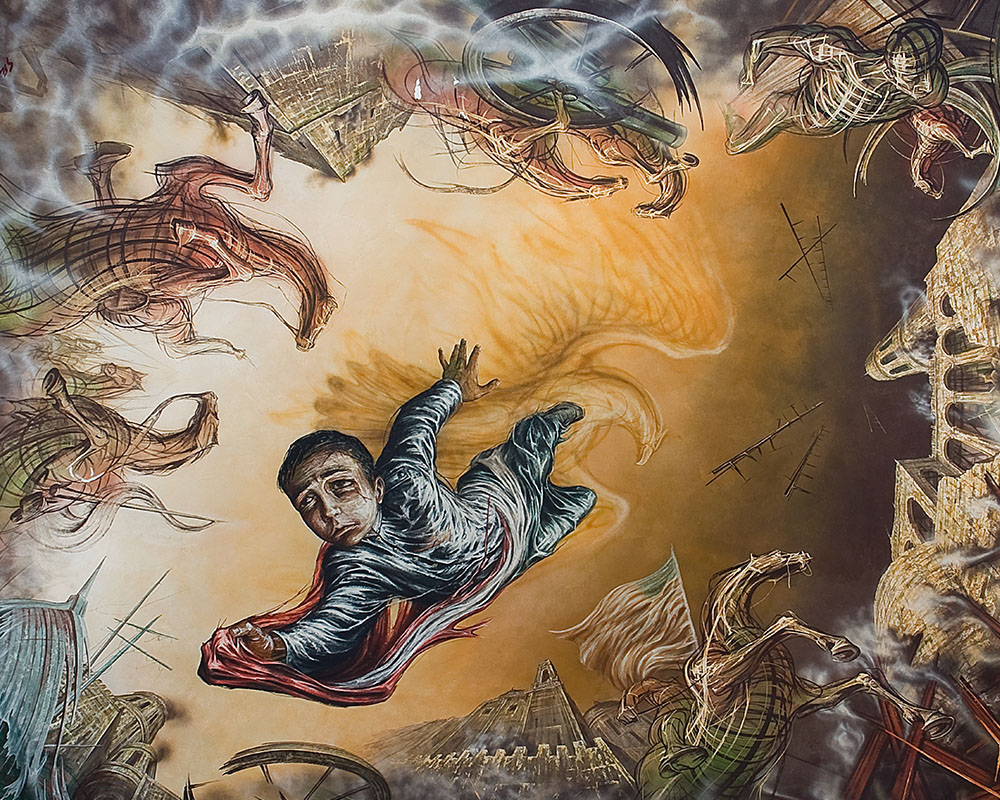 Location: Dome of the main entrance

It represents the fall of Juan Escutia, one of the Niños Héroes, which took place during the battle against the American troops at Castillo de Chapultepec, in 1847. It was painted falling with the Mexican flag; behind him appears an eagle that symbolizes the Mexican nation. In this way the painter represents the defeat of the national army against the invaders, which culminated in the loss of more than half of the territory. Around the central figure appear buildings such as the Castillo de Chapultepec, the former Convent of Churubusco and the Cathedral, representing some of the places where the most important battles took place. The steeds symbolize the horses of the Apocalypse, implying that this war involved a series of misfortunes for Mexico. The ship located on the left is one of the ships that penetrated the national territory for Veracruz, under General Winfield Scott. 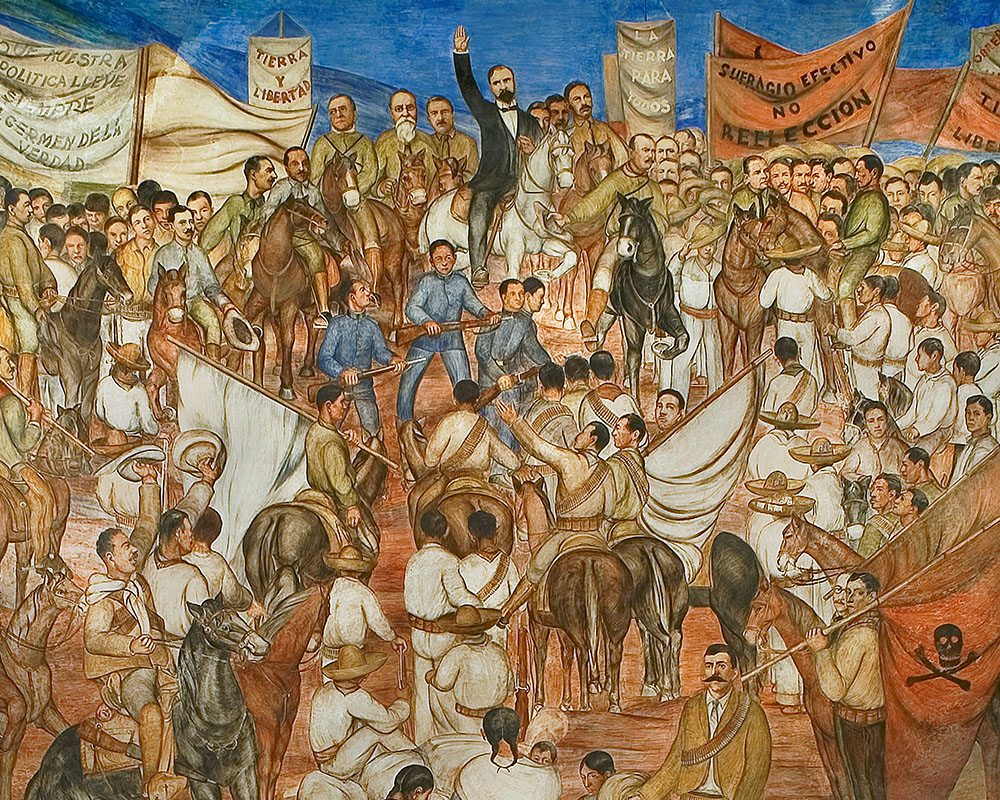 This painting tries to give a general vision of the revolutionary panorama that overthrew the dictatorial regime of Porfirio Diaz. At the center, at the top, some leaders of the movement appear: Francisco I. Madero, Venustiano Carranza and Álvaro Obregón. The groups of figures that appear under the blankets and banners symbolize the contingents of the various nuclei that participated in the Revolution: peasants, workers and people of the people who joined the struggle. The blankets and signs illustrate the main slogans for which the revolutionaries fought. Opening the way to Francisco I. Madero are the cadets of the Military College; in this way the morning of February 9, 1913, is represented, when the president left Chapultepec Castle to go to the National Palace and face the armed uprising in the Ciudadela. This conflict started the episode known as the Ten Tragic. 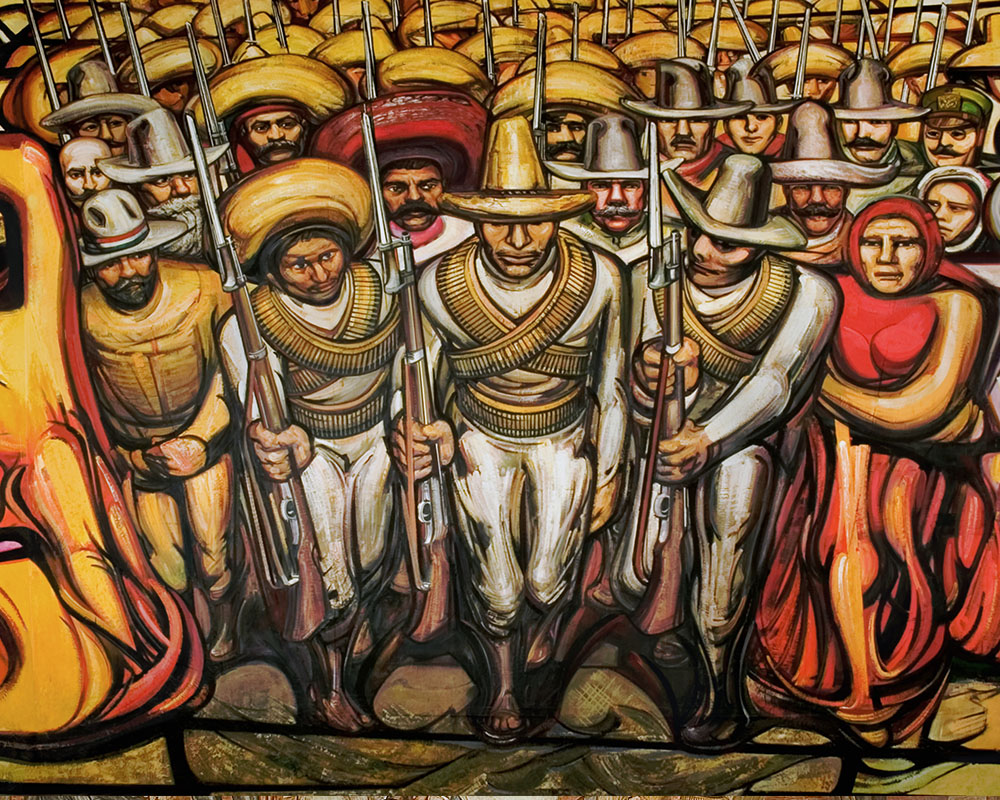 Material and technique: acrylic and pyroxylin on cloth-lined wood

The work covers the period from 1906 to 1914. In the first panel, on the right side, we see the petrified figure of Porfirio Díaz, symbolizing the decadence of his regime. In the following panel is the same Díaz surrounded by his cabinet and treading the Constitution of 1857. This section also illustrates the decadence of Porfirianism: the dancers of the can-can entertain the aristocrats while the people live plunged into slavery. The next part, from right to left, shows the Cananea Strike occurred in 1906, a moment that, in the opinion of the painter, marked the beginning of the revolutionary struggle. Along with this passage we observe the ideologues that predate the founders of the Mexican Liberal Party; This section is headed by Karl Marx, Miguel Bakunin and Pierre J. Proudhon. On the left wall are the popular forces formed by Villistas, Zapatistas and Constitutionalists, as well as the various leaders of the movement. In the next part highlights the figure of a revolutionary who abruptly stops his horse. The rider has left behind a long line of corpses. This final part of the composition symbolizes the end of the first stage of the revolution.